My homelab grew quite a bit over the past years. And with that, my networking needs also changed: stricter firewall rules, segregating untrusted IoT devices into separate networks, traffic prioritization, and more. I wanted to document my switch and VLAN configuration. And maybe this is useful for someone else, too.

The Mikrotik CRS328-24P-4S+RM is a beefy Layer 3 (L3) switch. It features 24 Gigabit Power over Ethernet (PoE) ports and four 10 Gbps SFP+ ports. It has a 500W power supply, so it’ll be able to serve as a core switch for my homelab for a long time. It’s rack-mountable and was significantly cheaper than comparable Ubiquiti gear I was considering at the time of the purchase. I also replaced its stock fans with Noctua NF-A4x20s, making it completely silent. As long as I don’t use too many PoE devices and keep an eye on the temperatures, these fans will dissipate enough heat for the time being. For routing, I use OPNsense, so I only need the L2 capabilities of the Mikrotik switch, which is why I run it on SwOS instead of RouterOS. So, instructions in this guide also refer to SwOS.

In computing, a router on a stick, also known as a one-armed router, is a router that has a single physical or logical connection to a network. It is a method of inter-VLAN (virtual local area networks) routing where one router is connected to a switch via a single cable.

The traffic of the native VLAN may traverse a trunk port.

Here is how we’re going to use the ports of the switch:

The only thing missing now is configuring the VLANs. First, we enable Independent VLAN Lookup (IVL) on the System tab. We then add our VLANs and configure port isolation on the VLANs tab:

On the VLAN tab, we configure trunk, hybrid, and access ports:

Easy as that! Check the official Mikrotik docs for more VLAN example configurations. 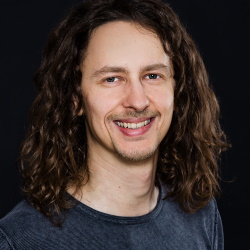 Michael Schnerring
Software Engineer
I've been a computer geek all my life. I'm passionate about open-source and digital privacy. I like video games and CrossFit. I'm also terrible at blogging.
Zurich
Switzerland